Now I personally think Zelda: A Link to the Past is one of the best games ever made (and I’m right). So hearing there was a new game that takes a massive influence from Zelda: ALTTP and adds in some interesting dynamics. Including a randomised world and finding progression through hard work and sacrifice. What could go wrong?

Sparklite has all the right elements to make a great Zelda clone and may even beat some of the other most recents hits such as Dead Cells, Children of Morta and Moonlighter at their own game. But in all honestly there are some areas where it falls flat. 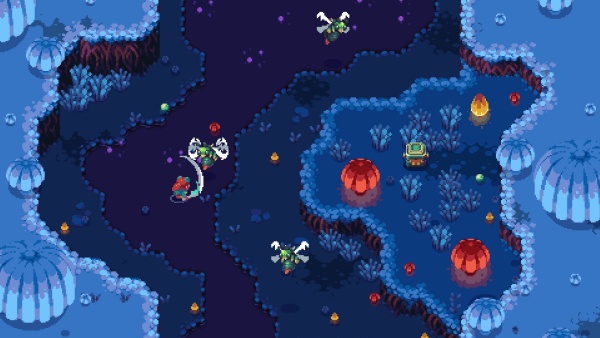 But to start this review off, let us go over the story which sees players as Ada (not of RE 2 fame) a young adventurer who crash lands her ship in the middle of an unknown land. To make things worse this unknown place appears to be having a few issues with its shifting landscape. Thus comes in the randomised element to the world. But there is a safe refuge with people in the sky, who have created a makeshift town with merchants, explores and other people who could aid Ada in her journey.

The journey you may ask is all about defeating a number of monstrous titans, solving a complex mystery and restoring the land to its former and correct self. Nothing special in regards to a story as it follows a generic plot of “Go out, defeat evil and save the day”. Games like the for-mentioned Zelda: ALTTP did the same thing and many others do to, but Zelda used a cleaver mechanic which shifted from the light world to the dark world. This played into the story and worked beautifully as a gameplay mechanic, making the journey feel a lot more interesting. It’s one of the best, if not the best Zelda game for this reason. Many other games which follow this type of plot do offer something to compensate, with interesting dynamics in gameplay, a world that’s visually engaging or just entertaining to explore. 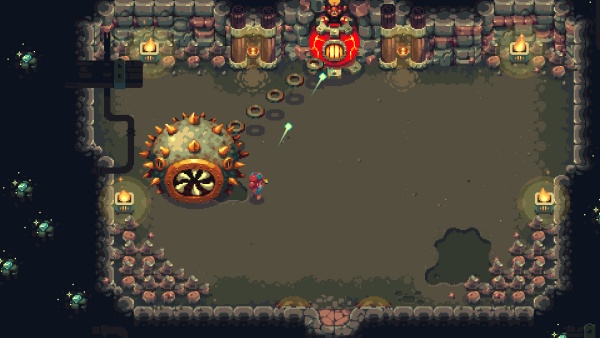 Sparklite does very little in terms of a charismatic plot or world but it does manage to incorporate some story elements into the gameplay fairly well. Players can upgrade the floating refuge which will then allow you to build new gear for the mission below and a few other not so important things. Aside from this and the whole randomised element to the world design, there’s not much else on offer. It’s the same, pixel, 90’s SNES style visuals we’ve seen before with the same type of monsters to fight and the world itself is just a little flat. It’s not anything to scoff at as the artists have done a wonderful job at creating a nice looking world, with many different environments, great looking bosses and all. But it just doesn’t stand up very well with the likes of recent games such as Moonlighter.

Overall the game will take you a number of regions which each have their own unique visual characteristics. One area is an acid filled bog, while another is a peaceful and beautiful forest during an autumn season. Each of these regions has their own enemies and hazards which is great effort on the artists and designers. Combat is rather simple as you’ll mainly use a singular melee weapon and a bow, but there are other items and power ups you can obtain, allowing you to plant bombs, shoot out a surge of deadly sparklite power and litter the nearby area with grenades. Exploration is thriving in Sparklite, mainly having hidden underground areas with the entrance hidden under a large boulder. So you’ll most likely do what I did and blow up every possible boulder to find some awesome dungeon with some epic loot.

A lot of the bosses are pretty cool, if not a little basic as they never develop in scale or tactics. But they look pretty cool and in general the combat is fine while the real meat of the game is the exploration. 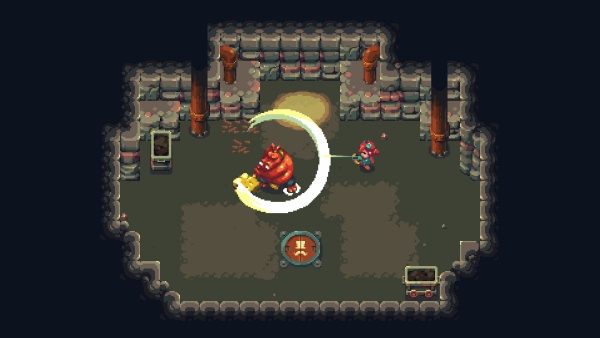 The one thing that Sparklite is clearly presenting is an experience much like Dead Cells in many ways. You go down below from the safe refuge, explore, find items, die and repeat. This formula does work if done right and has a good balance or risk/reward, pacing out the journey and keeping the world interesting. Sparklite feels massively repetitive and for the first few hours a complete grind. Obtaining items can be a slow business and to build up your currency of Sparklite to upgrade the town and in return upgrade yourself, can mean repeated trips below and just doing the same thing over and over. It’s just a slow process and having certain upgrades be very expensive within the first half of the game doesn’t help matters either.

A game like Dead Cells rewarded both types of players who took it slow and steady and sped run the entire thing. Sparklite demands you repeat, repeat and repeat some more just to progress a little further.

Sparklite is fine overall. It has a nice visual style, good wholesome fun and some neat mechanics. But it’s grindy first half of the journey, lack of interesting mechanics and overall too generic feel means it’s not standing high with other greats sadly. Still worth checking out if you’re an old school Zelda fan.

A PS4 review of Sparklite was provided by the publisher for the purpose of this review.